Our family just returned from 12 days travelling in Pennsylvania, Virginia and Maryland. Here are some photographic highlights. 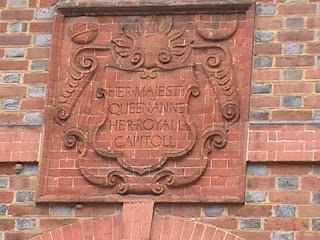 Among other places we visited Colonial Williamsburg, the seat of government for the Virginia colony between 1699 and 1780. The city was named for King William III of England, who reigned from 1688 to 1702. The above reference to his sister-in-law and successor, Queen Anne, is inscribed over the door of the Capitol, which housed the bicameral legislature, consisting of the elected House of Burgesses, the lower chamber, and the appointed Council, the upper chamber. 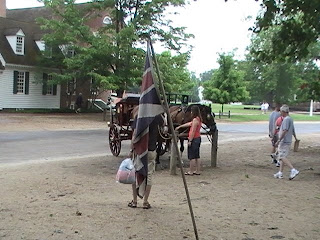 The pre-1801 Union Jack flies everywhere in the historic district of this city. This flag reflects the union of England and Scotland in 1707 (and, earlier, the personal union of the two kingdoms in James VI and I), but not the subsequent union of Great Britain and Ireland 94 years later. Consequently the flag above lacks the red diagonal Cross of St. Patrick. 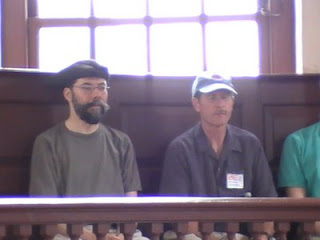 I was privileged to be part of a re-enactment of three court cases in the Couthouse on Duke of Gloucester Street. Actors were chosen from the audience to participate in real cases from the historical records. I was one of the jurors (above left, wearing three-cornered hat). It was a fascinating look back to an earlier form of our own contemporary justice system. 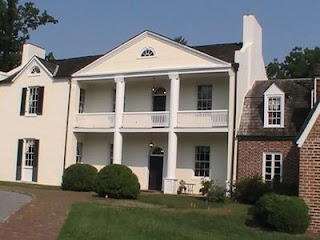 We visited Mount Airy Mansion, once the home of Benedict Swingate Calvert, the natural son of Charles Calvert, the 5th Lord Baltimore. It is located in Upper Marlboro, Maryland, not too far from Washington, DC. 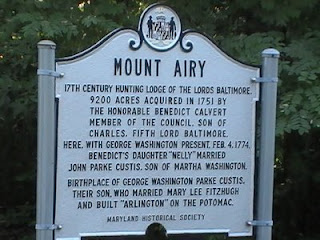 Here is the plaque outside Mount Airy, describing its historical significance. 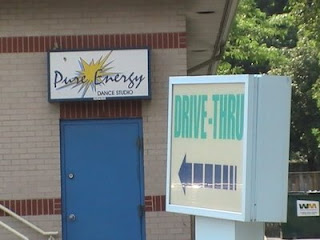 This has nothing to do with our travels, as I took the above photo after our return home. It portrays the only dance studio in Canada with a drive-thru, an innovation that is, admittedly, unlikely to catch on elsewhere.
Posted by David Koyzis at 05:16