Book now available: We Answer to Another 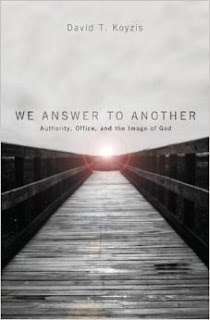 My new book is finally out. We Answer to Another: Authority, Office, and the Image of God is now available from Pickwick Publications. It is also available from amazon.com, although it is listed as temporarily out of stock, undoubtedly because they have not yet received copies of the book. Thus far it is not listed on amazon.ca, but I will let Canadian readers know when it appears there. In the meantime, your best bet would be to phone the publisher at 541-344-1528 or email them at orders[at]wipfandstock[dot]com.

Here is the description of the book from the back cover:

The quest to escape authority has been a persistent feature of the modern world, animating liberals and Marxists, Westerners and non-Westerners alike. Yet what if it turns out that authority is intrinsic to humanity? What if authority is characteristic of everything we are and do as those created in God's image, even when we claim to be free of it? What if kings and commoners, teachers and students, employers and employees all possess authority?

This book argues that authority cannot be identified with mere power, is not to be played off against freedom, and is not a mere social construction. Rather it is resident in an office given us by God himself at creation. This central office is in turn dispersed into a variety of offices relevant to our different life activities in a wide array of communal settings. Far from being a conservative bromide, the call to respect authority is foundational to respect for humanity itself.

"In this timely and highly valuable book, Koyzis exposes the problems and points the way to solid, balanced answers. The subtitle of We Answer to Another sums it up: 'Authority, Office, and the Image of God.' Humans have been created in the image of God and called to serve the Creator—the One to whom we are ultimately accountable. To exercise a responsibility is to hold an office of real authority as servant-stewards of one another. We can thus participate in holding one another accountable to the responsibilities of those offices. Sound old-fashioned? It's the most contemporary word of wisdom we and our neighbors throughout the world need to hear today!"
—James W. Skillen, President Emeritus, Center for Public Justice

"Liberal societies, regarding themselves as premised on the generative moral autonomy of the individual, have a constitutive problem with authority—freedom needs no justification, only authority. In this highly illuminating, wide-ranging, and exceptionally clear book, David Koyzis shows how this view not only destabilizes authority but actually diminishes our humanity. Authority is not autonomy but 'responsible agency,' exercised individually and corporately in many diverse human settings—'offices'—that arise from our being created in God's image. Recovering authority as 'answering to another' makes us more, not less, human."
—Jonathan Chaplin, Director of the Kirby Laing Institute for Christian Ethics, Cambridge