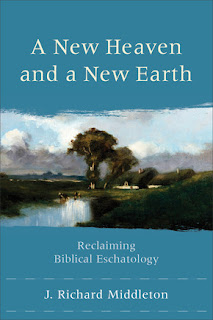 Christians have a complex relationship with the future. On the one hand, we recognize that the future is in God's hands. But on the other, we cannot see clearly what it holds for us. The historical-critical enterprise in modern biblical studies has taught us that the Old Testament prophets were not so much looking into the future as warning God's people of his judgement if they continued to abuse the poor, if they failed to let the land rest every seventh year and if they generally declined to obey his law. In other words, they were speaking truth to power, as the old expression has it, rather than predicting the future in the fashion of psychics or clairvoyants.

Nevertheless, if we take seriously the narrative structure of scripture, and if we recognize that the Bible tells a single story of redemption, then we cannot avoid the reality that this story must have an ending at some point in the future. This narrative is sometimes outlined in terms of three acts: creation, fall and redemption. Or sometimes four: creation, fall, redemption and consummation. The Bible does address the future, even as it discourages speculation on specifics (e.g., Matthew 24:36, Mark 13:32, Acts 1:6-7, 1 Thessalonians 5:1-2). We are promised that Jesus Christ will one day return to complete his inauguration of God's kingdom.

Within the discipline of theology, eschatology is the doctrine of the last things as taught by scripture. Writing in this subfield can be hazardous, because it tends to bring to the fore notions with a thin biblical basis. But Richard Middleton's new book is a welcome exception to this tendency. Indeed I would go so far as to say that it is one of the best books on the subject to appear in decades. What does Middleton do here and what is his unique contribution?

Middleton attempts to demonstrate from the biblical record that the true hope of salvation for the Christian is not a disembodied soul survival in heaven after death but the resurrection of the fully-embodied person at the return of Christ to rule over a renewed earth. Redemption in Christ, moreover, covers not just individual human beings but the whole created order, which, as Paul tells us, is groaning in anticipation of the final consummation (Romans 8:22). Middleton grapples with the relevant biblical texts as he works through his argument, and he does so in a way that is persuasive and honouring to scripture's status as God's word. In so doing, he comes up with some conclusions that many will find surprising. For example, the ancient Hebrews appear to have had no firm doctrine of the afterlife, as indicated in several Old Testament passages (e.g, Psalms 6:5, 30:9, 115:17, Isaiah 38:18). Apart from vague references to Sheol as the abode of the dead, Middleton tells us, “one thing is clear: there is no access to God after death” (p. 133).

Furthermore, he concludes that, while the Bible speaks of heaven as God's dwelling place, there is little evidence for the popular notion, often expressed from the pulpit during funerals, that the souls of the righteous join him there after death (pp. 211-237). Here is Middleton:

Having studied the relevant texts, I am surprised at how little evidence there actually is for an interim state in the New Testament, certainly less than I had expected. In the end, however, it does not matter. Authentic Christian hope does not depend on an intermediate state; nor do Christians need the Platonic notion of an immortal soul in order to guarantee personal continuity between present earthly existence and future resurrection life (p. 236).

But, some will protest, doesn't the apostle Paul express the desire to be absent from the body and present with the Lord (2 Corinthians 5:8)? He does, but it is clear from the first verses of this chapter that Paul is in fact speaking of the final resurrected body in the redeemed earth. Does this mean there is no interim or intermediate state between death and resurrection? Possibly, but once again it may not finally matter much. Even F. F. Bruce suggested that “in the consciousness of the departed believer there is no interval between dissolution and investiture, however long an interval might be measured by the calendar of earth-bound human history” (p. 236). In other words, it could be that, after I die to this life, the next thing I will be aware of is my resurrection at the last day, never having missed the believers I left behind because, by God's grace, they too will be present on that day. That is a comforting thought.

I myself am open to the possibility of an intermediate state, largely because I am reluctant to break with what appears to be the historic consensus of the church on the matter. At the same time, it is true that the ecumenical creeds profess a belief in “the resurrection of the body and the life everlasting,” and not explicitly in the immortality of the soul. Furthermore, it is also true that belief in resurrection requires considerably more effort than does mere immortality. After all, the ancient Greeks whom Paul encountered in Athens had no difficulty with the latter concept, as they would have known it from Plato's writings, but they scoffed at the resurrection (Acts 17:32). Indeed our confidence is not just that we will survive death in disembodied form but that God himself will miraculously intervene to bring us back to life perhaps aeons after our bodies have dissolved into the earth. And that, to be blunt, is simply hard to accept. Yet this is what God has promised us in his word.

This is such a marvellous book that I am reluctant to point to weaknesses, but they do come towards the very end. In his final chapter, “The Challenge of the Kingdom,” Middleton warns of the dangers of combining two types of dualisms, namely, that between sacred and secular, and that between “us” and “them.” Unfortunately, because he discusses this rather too quickly and superficially, the relationship between the two dualisms may not be obvious to the reader. Furthermore, Middleton makes a derogatory, and to my mind wholly unnecessary, comment on the Tea Party movement in the United States (pp. 279-280), charging that its followers “are basically upset at the perceived loss of their own privilege; they are not angered by the injustice shown to others, especially not others who are different from them.” I am no fan of the Tea Party, whose understanding of the task of the state is severely deficient and which errs in assuming one can combat a decadent late liberalism by recovering an earlier form of the liberal project. Nevertheless, adherents are not wrong to point to the dangers of an overweening state, something which has taken on idolatrous proportions in so much of the world. Middleton similarly dismisses the so-called culture wars: “We need to extricate ourselves from these wars, which are predicated on an oppositional dualism of 'us versus them' (or 'in-group versus out-group'), since this dualism is antithetical to the gospel of the kingdom” (p. 280). Once again the connections are far from obvious in this statement. Another, and almost certainly fairer, view of the matter can be found in J. D. Flynn's “The One and Only Culture War.”

Nevertheless, despite these deficiencies, Middleton is correct to point to the link between eschatology and ethics. If we think we are on our way out of the earth to live eternally in an ethereal heavenly realm, that will have definite implications for how we treat the earth in the present. If it is ultimately to be destroyed and is destined to be discarded like an empty milk carton, then we can apparently abuse it with impunity, because, after all, God is preparing another place for us elsewhere. This, however, is not consistent with the biblical witness. “The earth is the LORD's and the fulness thereof, the world and all who dwell therein” (Psalm 24:1). Furthermore, “God so loved the world” (John 3:16) and intends to save his good creation from the power of sin and death. Our salvation has not yet arrived, but we await it patiently, confident that God's purposes will be worked out “on earth as it is in heaven.” For that we can rightly thank God.
Posted by David Koyzis at 21:48

Not to be flippant, but I am reminded of my youthful flirtation with the rigid certainty of dispensationalism. I still have my Schofield Bible. On my way to reformational apostasy I laughed off the arcane and convoluted premillennial and postmillennial positions saying I was panmillennial: it will all pan out in the end. Not exactly a well considered stance, but there you are. Thank you David for an excellent review.

Thanks, Dick. I too flirted with dispensationalism when I was around 15 years old. I read Hal Lindsey's Late Great Planet Earth and found it superficially persuasive. But the very next year I read through the entire Bible for the first time and couldn't find what Lindsey and others claimed to find, so I quickly moved on. These days I don't spend a lot of time on dispensationalism. I rarely comment on it in my published writing, because there are more pressing battles to be waged.