Dampening the culture wars, 1: how to get along while agreeing to disagree 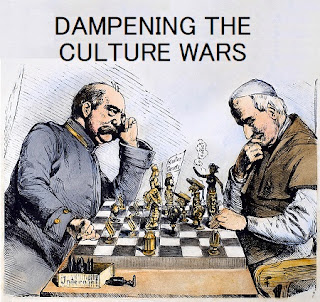 In the aftermath of the French Revolution, France became a divided polity with one half of the country favouring its legacy of republicanism and secularism, and the other half retaining its loyalty to its older traditions of monarchy and Roman Catholic Christianity. Over the next nearly two centuries, France lurched back and forth between republican rule and two varieties of monarchical rule exemplified by the Bourbon-Orleanist kings and the Bonapart emperors. Altogether there were five republics, two monarchies, two empires, the Paris Commune, and the collaborationist Vichy régime of Marshal Philippe Pétain. During this unstable era, France suffered a series of military defeats in 1815, 1871, 1940, 1954, and 1962, and endured a succession of paper constitutions which, according to one observer, amounted to little more than "periodical literature." Other European countries were affected by a similar cleavage, as seen, for example, in Bismarck's Kulturkampf in imperial Germany and the Spanish Civil War (1936-1939).

However, a few countries, while similarly divided, were spared the worst effects of this cleavage. Here the leaders of the different communities learned to co-operate for political and other common purposes, even as their respective constituents remained separated within their own communities. No longer was each side attempting to defeat the others and to gain power at their expense. Rather, they formulated ways of sharing power at the higher levels while tolerating a wide scope of diversity on the ground. Catholics, Protestants, liberals, and socialists maintained their own distinctive institutions, ranging from fraternal societies, schools, business enterprises, labour unions, artists co-operatives, and charitable foundations to print and electronic media and political parties. In short, the communities' leaders had come up with a way, in effect, to live and let live, permitting a high degree of communal autonomy so that one community would not feel oppressed by the others. Political mechanisms—some constitutional, others statutory, and still others merely conventional—were established to maintain a precarious balance among the several communities, often based on grand coalitions among several political parties, coupled with qualified majority requirements for the most significant of policy issues.

In such countries, majority rule was out of the question for two possible reasons. First, in a polity divided three or more ways, no single group would constitute a clear majority. But, second, even if a majority could be secured in a parliamentary body, there was a huge risk of a hardening of majority and minority positions such that one or more groups would find themselves continually shut out of power. This is what happened in Northern Ireland for the fifty years between its creation and the imposition of direct rule from London, as Catholics found themselves continually in a minority position vis-à-vis Protestants.

In the 1960s and '70s a series of books and articles were published that used the term consociationalism to describe these power-sharing arrangements. Among the leading academics analyzing this phenomenon were Arend Lijphart, Hans Daalder, and Kenneth D. McRae, the last of whom wrote and edited a book called Consociational Democracy: Political Accommodation in Segmented Societies (Toronto: McLelland & Stewart, Carleton Library, 1974). This book's title indicates an assumed positive relationship between consociational mechanisms and democracy, something that would come to be doubted later, as mass participatory democracy with its majoritarian assumptions seemed to be the wave of the future.

This is the first in a series of posts in which I plan to explore consociationalism, its continuing relevance for today, and how it might enable a polarized country such as the United States to maintain a truce between red and blue America, muting the ongoing culture war, and at least temporarily ending the stalemate between two (or more) subcultures, each of which distrusts the other and would love to vanquish the other definitively at the polls or possibly in another, less peaceful fashion.

I plan to post in this series each friday, if not more frequently. Future topics to be addressed will include the stories of several countries compelled to move towards power-sharing at the élite levels coupled with guarantees of communal autonomy. I hope that this series will get people discussing ways in which we might agree to disagree while seeking ways to get along in those areas where we are able to do so.

Next: The features of power-sharing