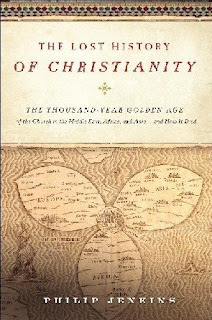 It was almost by chance that I purchased Philip Jenkins' book, The Next Christendom, in Toronto back in 2002. I hadn't before heard of him, but the volume looked intriguing and my subsequent reading of its contents proved a thought-provoking experience. In it Jenkins chronicled the dramatic shift in recent decades of Christianity's centre of gravity from Europe and the west to the "global south," i.e., Africa, Asia and Latin America. As he told this story, he dropped some tantalizing hints that the historic demographics of Christianity might not have been what most people think they were.

Six years later Jenkins fleshes out those hints for us in The Lost History of Christianity, subtitled: "The Thousand-Year Golden Age of the Church in the Middle East, Africa, and Asia — and How It Died." Most of his readers will be familiar with the two worlds of Latin and Greek Christianity, centred in Rome and Constantinople respectively. Few will be aware of the territorially vast christian world east of the Roman Empire extending from the Syriac-speaking Near East to the borders of China or to the south in Egypt and Ethiopia. These were more than just a few "schismatics" peripheral to the "mainstream" of Christianity. The numbers were large, at times exceeding those of the Latin west under papal jurisdiction, thereby constituting another christian "mainstream" — and one closer than the others to the semitic cultural world of the New Testament.

To illustrate the size of this "Third Christian World", Jenkins focusses on Timothy I, Patriarch, or Catholicos, of the Church of the East around 800. His see was initially in the city of Seleucia and later moved to nearby Baghdad, but his ecclesiastical jurisdiction extended far beyond the land between the rivers:

In terms of his prestige, and the geographical extent of his authority, Timothy was arguably the most significant Christian spiritual leader of his day, much more influential than the Western pope, in Rome, and on a par with the Orthodox patriarch in Constantinople. Perhaps a quarter of the world's Christians looked to Timothy as both spiritual and political head. . . .

In England, to give a comparison, the medieval church had two metropolitans: respectively, at York and Canterbury. Timothy himself presided over nineteen metropolitans and eighty-five bishops. . . . Just in Timothy's lifetime, new metropolitan sees were created at Rai near Tehran, and in Syria, Turkestan, Armenia, and Dailumaye on the Caspian Sea (pp. 6, 10).

So what happened to this now nearly defunct Christendom? It did not die out in the 4th century. Indeed it endured as a vital spiritual community into the 14th century, that is, up to the very cusp of the modern age. Through most of this time Christianity was in large measure a Syriac religion whose adherents breathed the very atmosphere of Yeshua and his apostles. And this at the supposed zenith of western Christendom.

Of course, the muslim invasions of the 7th century put enormous pressure on the christian communities they conquered. Yet the latter continued to survive and thrive for centuries thereafter, even under foreign domination. However, in the 14th century a series of catastrophes led to the virtual collapse of Syriac Christianity and the far flung communities it had spawned. These included renewed persecution at the hands of muslim rulers, successive Mongol and Turkish invasions, a cooling global climate leading to failed harvests and conflict over scarce resources, and the Black Plague. The remaining christian communities were finally finished off in the 19th and 20th centuries, as nationalistic régimes sought to cleanse their territories of ethnic and religious minorities.

This is a story that has not been fully told and understood until now. We are indebted to Jenkins for bringing it to our attention. How his book will be received probably depends on the audience. It is obviously not intended primarily for scholars and can better be described as a page-turner aimed at an educated audience. Some of Jenkins' fellow academics may fault him for his lack of knowledge of Syriac-language primary sources and his dependence on (mostly) English-language secondary sources. Yet others may applaud his effort to put before an English-speaking public a significant historical episode with which they are almost certainly unfamiliar.

One facet of Jenkins' argument gives me pause as a political scientist: a key reason why so many christian minorities were able to survive into the 20th century is that they successfully hid themselves from central government authority within relatively inaccessible topography. One thinks of the Maronite Christians of Mount Lebanon or the Orthodox Montenegrins in the Ottoman-dominated Balkans. Until fairly recently few governments were able fully to exercise their authority over every square inch of territory nominally under their jurisdictions. This provided an opportunity for disliked minorities to continue to live their faith relatively free from harassment.

By the 20th century, however, technical developments enabled governments to enforce their control in uniform fashion over all their territories. This monopoly over the power of the sword, to use Paul's expression (Romans 13), enabled governments to punish brigandage and other criminal activity more consistently than in the past. This represented a net gain for justice. My favourite christian philosopher, Herman Dooyeweerd, has defined the normative internal structure of the state in terms of this monopoly, which has ensured an unprecedented uniformity in the administration of justice.

On the other hand, it also brought to the modern state the means to oppress more consistently as well. It was only in the 20th century that Egypt and Turkey finally rid themselves of their minorities, either through death or exile. If justice becomes more certain in the modern state, so does injustice. In this respect, one might well lament the passing of the old polyglot empires whose relative tolerance was based, not on good will or respect for human rights, but on their incapacity to be fully intolerant.

I will end with a quotation from Jenkins:

Historically, Christians faced the issue of whether to speak and think in the language of their anti-Christian rulers. If they refused to accommodate, they were accepting utter marginality, and cutting themselves off from any participation in a thriving society. Yet accepting the dominant language and culture accelerated the already strong tendency to assimilate to the ruling culture, even if the process took generations. Although a comparable linguistic gulf does not separate modern Western churches from the secular world, Christians still face the dilemma of speaking the languages of power, of presenting their ideas in the conceptual framework of modern physics and biology, of social and behavioral science. To take one example, when churches view sin as dysfunction, an issue for therapy rather than prayer, Christians are indeed able to participate in national discourse, but they do not necessarily have anything to offer that is distinctive. Nor is there any obvious reason why believers should retain their attachment to a religious body that in its language and thought differs not at all from the secular mainstream. Too little adaptation means irrelevance; too much leads to assimilation and, often, disappearance (p. 245).