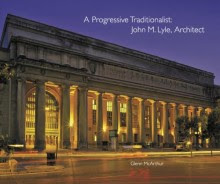 I admit it. One of my guilty pleasures is the handsomely-illustrated coffee table book, and the current offering under review fulfils that role very nicely indeed. Glenn McArthur’s new book is a delight to page through for anyone possessing an interest in the arts and especially architecture.

John McIntosh Lyle (1872-1945) was one of the great architects of his day, and he had a strong connection with Hamilton, responsible for a number of familiar structures gracing our city.

Lyle was born in County Antrim, Ireland, in 1872. When his father, the Rev. Samuel Lyle, was called to the pastorate of Central Presbyterian Church in 1878, the family immigrated to Canada. The Rev. Dr. Lyle led the congregation for more than three decades, retiring in 1911. His son John studied at the Hamilton Art School, briefly at Cornell University, and at the Yale School of Art. In New York City he apprenticed at the office of Hamilton architect Frank Freeman before heading to Paris to enrol at the prestigious École des Beaux-Arts for further studies.

Once these were completed in 1896, Lyle returned to North America, settling in New York and eventually finding work in the firm of Howard & Cauldwell. Only three years earlier, the World’s Columbian Exposition in Chicago had changed the course of the continent’s architecture, securing the place of the distinctive Beaux-Arts neoclassical style, especially in public buildings. Lyle himself would design two bandstands for the 1901 Pan-American Exposition in Buffalo.

In 1905 Lyle returned to Canada, taking up residence in Toronto, where an extensive fire a year earlier seemed to promise opportunities to contribute to the vast rebuilding project. Although this promise did not pan out immediately, he did design the Royal Alexandra Theatre, built between 1905 and 1907, which was named for Edward VII’s queen consort. 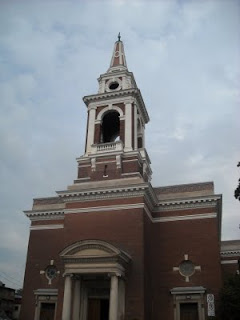 A fire in 1906 destroyed his father’s church, Central Presbyterian, which had occupied a quasi-gothic building constructed in 1858 at Jackson and MacNab Streets. The congregation decided to relocate a bit farther south of the city’s centre to Caroline and Charlton Streets. The completed structure borrows from a number of influences, including the Church of St. Martin-in-the-Fields in London and the Congregational Church of Naugatuck, Connecticut. One of its more unusual features is that it has a flat roof, thereby resembling more the public edifices favoured by the Beaux-Arts school than the traditional European church. Nevertheless, the church’s interior is dominated by a series of traditional stained-glass windows portraying stories from the Bible. This juxtaposition of the modern and the traditional appears to vindicate McArthur’s choice of title for his book. So satisfied was Lyle with the outcome of his efforts that he incorporated a black silhouette of the building into his personal bookplates. The spire of Central is a distinctive landmark visible throughout the surrounding neighbourhoods.

From here Lyle would go on in 1913 to design the Great Hall of Toronto’s Union Station (see book cover above), familiar to generations of commuters who have passed through it twice daily. While other urban railway terminals have seen the wrecker’s ball in recent decades, this building continues to serve the travelling public much as it did when it first opened.

Throughout his career, Lyle was much in demand by the nation’s banks, where the neoclassical style was favoured in the early years of the 20th century, perhaps as a way of impressing would-be depositors with the imposing nature of their own financial solidity.

Among the Hamilton landmarks for which Lyle was responsible are the palatial home Wynnstay, now Mount Mary Immaculate, in Ancaster (1925); the Gage Memorial Fountain in Gage Park (1926); and the Hamilton High Level Bridge, where York Boulevard passes over the Desjardins Canal (1932). Other well-known Lyle designs include the Memorial Arch at Kingston’s Royal Military College (1921); and the Runnymede branch of the Toronto Public Library (1929), which incorporated English, French Canadian and aboriginal elements. I myself used to live near that branch three decades ago and visited it on occasion.

Also notable are the designs Lyle submitted for projects later awarded to others. Two examples are worth mentioning. In 1907 his proposal for the buildings of the Justice Department would have altered the landscape of the federal government’s public architecture by making it more resemble that of Washington, DC. When in 1922 The Chicago Tribune sought designs for its new building, Lyle’s unsuccessful effort featured neoclassical columns and, of all things, a spire reminiscent of the one he had placed atop Central Presbyterian Church!

Incidentally, Lyle's grandson recently donated a copy of this book to that church's library, where I came across it a few weeks ago after sunday worship. The family is to be commended for helping to disseminate knowledge of their forebear's contribution to Canadian architecture.
Posted by David Koyzis at 07:37