Why Liberalism Failed, a review 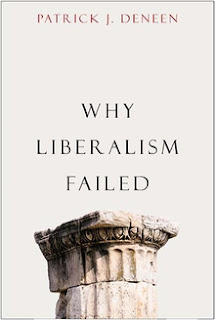 Just over three years ago, Bruce Ashford and I published a review of one of the more significant books in recent years: Patrick Deneen, Why Liberalism Failed. The Gospel Coalition published our review: Liberalism Failed Because It Collapsed Under Its Own Weight. Deneen's book merits mention twice in the 2nd edition of Political Visions and Illusions, which is now out in Portuguese translation. An excerpt from our review:

How and why is liberalism failing? Primarily because liberalism, as a centuries-old political philosophy, is rooted in a defective understanding of the human person. Liberalism ignores the person’s rootedness in local communities and their myriad customs and influences, replacing that rootedness with an inordinate allegiance to state and market, the instruments of our supposed liberation.

As Deneen sees it, the United States as a whole was established on liberal principles, and these have developed over the past nearly two and a half centuries in ways consistent with liberalism’s underlying presuppositions but inconsistent with a healthy social fabric. However, the overwhelming dominance of liberalism has been masked by the recent superficial polarization of the national political landscape into two factions.

Indeed, our most vociferous conflicts have pitted classical liberals, with their affection for a free market and small government, against progressive liberals, who view government as an instrument for the expansion of individual autonomy.