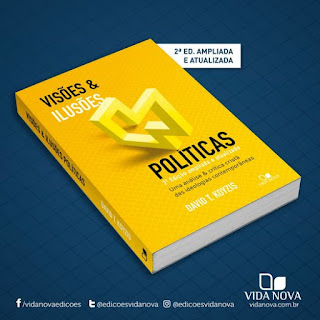 Last week was the launch date for the second Brazilian edition of Political Visions and Illusions, in Portuguese titled Visões e Ilusões Políticas. It is available from the publisher Edições Vida Nova and from the usual online vendors, including Amazon.co.br.

The book's translator was Leandro Bachega, who is a doctoral student at the Universidade de São Paulo. I am grateful for the hard work he put into this.

I look forward to receiving the author's copies soon. And I pray that this second edition will be a blessing to the people of Brazil, whom I have come to love greatly over the years. Eu adoro o povo brasileiro! Que Deus os abençoe!