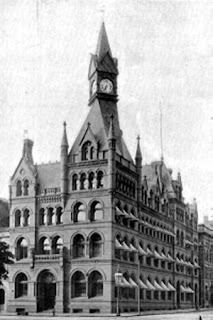 Which encyclopaedia carries articles on individual streets in Hamilton, Ontario? Wikipedia, of course. Read here about James Street, Locke Street, Dundurn Street, and even Concession Street and Mohawk Road on the "Mountain."

By the way, speaking of James Street, why was the old Birks Building, located at the corner of James and King and once described by Oscar Wilde as "the most beautiful building in all of North America," demolished back in 1972? It was a distinctive piece of Victorian architecture and a Hamilton landmark. It ought to have been preserved.
Posted by David Koyzis at 17:21