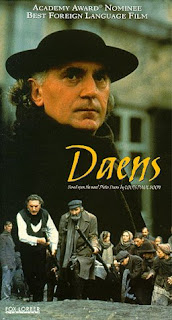 Stijn Coninx's Daens is a must-see for anyone with an interest in the development of Catholic social thought and its reception in an industrializing western Europe at the end of the 19th century. The setting is Belgium in 1893. Fr. Adolph Daens (Jan Decleir) is a priest assigned to a parish in Aalst, the bulk of whose members work in dangerous factories for poverty-level wages. Here accidents and deaths are a frequent occurrence, while the owners and managers choose to ignore the plight of their own employees. Caught in a darwinian struggle for survival, the owners decide to implement the "Scottish system," whereby the men are replaced by women and children commanding a lower wage.

Fr. Daens is scandalized by what he sees and undertakes to improve the lot of his poorer parishioners, successfully working for the universal franchise and then standing for election to the Belgian Parliament in 1894. He meets with success, but at the expense of his good standing in the Church, which defrocks him five years later. He is summoned to Rome to meet with Pope Leo XIII, whose encyclical Rerum Novarum was the inspiration behind Daens' efforts. The Pope declines to meet him personally, while a Vatican official hands him a blunt letter with the Pope's signature informing him that his call to the priesthood must come before everything else.

Among his political opponents is Charles Woeste, leader of the mainstream Catholic Party, whose support base is threatened by Daens' upstart Christian People's Party. The Socialists are another threatening presence, urging the oppressed workers to discard their christian faith altogether and join with them in a common struggle. Although Daens opposes socialism, Woeste and the ecclesiastical hierarchy persist in viewing him as a red priest. Tellingly, Nette Scholliers (Antje de Boeck), who organizes a general strike in support of Daens' efforts, falls in love with Socialist organizer Jan De Meeter (Michael Pas), a development that has its political parallel in Daens' (ultimately unsuccessful) efforts to forge an alliance with that party.

Three features of this film are worth noting. First, like Belgium itself, the film is bilingual, with conversations amongst the lower class occurring in the Vlaamsche taal while the upper crust speak French. This is an accurate portrayal of Belgian society at that time. Whichever language one grew up speaking at home, French was the language of the élites, despite the fact that native Flemish-speakers outnumbered native francophones. This linguistic duality plays a pivotal role when a parliamentary committee investigating abuses in the factories of Aalst is unable to comprehend the complaints of the workers.

Second, one of the characters in the film is the Belgian King Leopold II (Gérald Marti). Although English-speaking viewers of the film are likely unaware of his significance in the history of that country, Belgian viewers would be all too familiar with the infamous monarch, due to his association with the atrocities committed in the spectacularly-misnamed Congo Free State between 1885 and 1908.

It should finally be noted that the film is based on Louis Paul Boon's novel, Pieter Daens (the name of Adolph's printer brother), which means that the film is two degrees removed from the historical events it recounts. Was Daens perhaps less saintly or Woest and the church hierarchy less vicious than they are portrayed here? Are the characters caricatures of their real-life counterparts? Undoubtedly. This points to one of the flaws in an otherwise excellent film, namely, insufficient development of the main characters. I would have liked to know more of Daens' faith, including his love for Christ and his church, and his growing excitement over reading Rerum Novarum. All the same, a film can hardly do everything in 138 minutes. Daens is worth seeing for what it does do, and it does it very well indeed.
Posted by David Koyzis at 20:21