During my late father's visit to Cyprus in 2006, Abdullah billeted him and other members of our family in his holiday villa in Kyrenia. They shared the same birth date, but Abdullah was one year younger than my father.

Here are two buildings that Abdullah designed, along with a map showing the locations of his buildings in Nicosia: 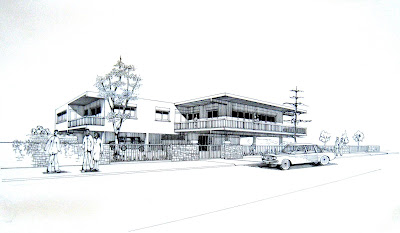 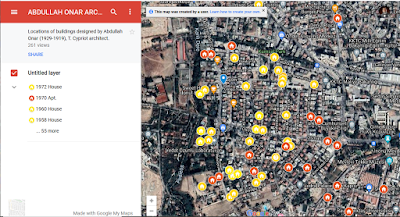 Here are some of his drawings of cityscapes in Cyprus: 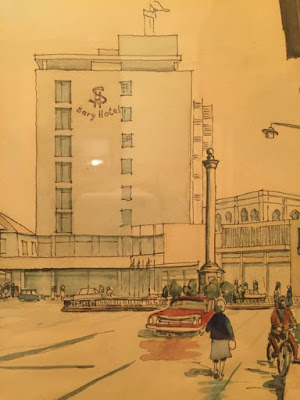 This late mediaeval structure is an especially interesting one. It is located in the old walled city of Famagusta and was built in the 14th century by the Frankish rulers of the island as St. Nicholas Cathedral. After the Ottoman Turks conquered Cyprus in 1571, a minaret was added and it was renamed Lala Mustafa Pasha Mosque. This is probably my personal favourite of Abdullah's artworks, and it appears to be a pen and ink drawing. 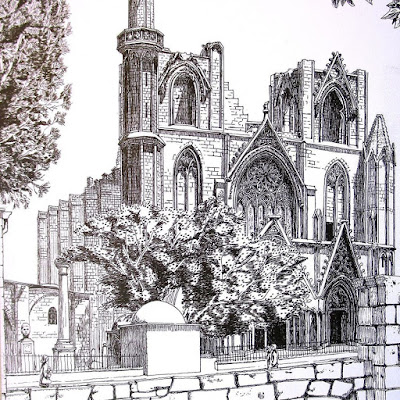 I recently wrote about Cyprus as an example of a failed consociational experiment in that it deliberately divided Greek and Turkish Cypriots against each other although the two communities had been living side by side for centuries beforehand. In fact, there was quite a lot of mixture between the two communities. Among our family's DNA cousins I've discovered a surprising number named Abdul, Huseyin, Ibrahim, Mehmet, Murat, and Mustafa, indicating that Greek and Turkish Cypriots appear to be a single genetic community. I hope and pray that my father's lifelong friendship with Abdullah will be a precursor to peace and reconciliation in the island.

Hi David, such a nice wish that we all share about Cyprus. I have one correction about one of the drawings above... the one with the bust of Atatürk and the column does not belong to my father. Thank you! A. Onar

Thanks, Anber. I've removed the photo.