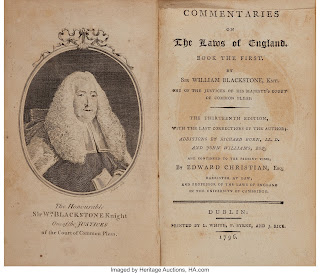 Recently I read an abridged volume of Sir William Blackstone's Commentaries on the Laws of England, which were published between 1765 and 1769 in four books, titled Of the Rights of Persons, Of the Rights of Things, Of Private Wrongs, and Of Public Wrongs. Blackstone's Commentaries were hugely influential on the American founders, who drew on his analyses as they were establishing their new federal republic in North America. (Blackstone appears to have been less influential in Canada. I find only two references to him in the parliamentary debates leading up to Confederation in 1867, and one of these is negative.) Yet one area in which Blackstone was not followed consistently was on slavery.

that pure and proper slavery does not, nay cannot, subsist in England; such I mean whereby an absolute and unlimited power is given to the master over the life and fortune of the slave. And indeed it is repugnant to reason, and the principles of natural law, that such a state should subsist anywhere.

I have long found it curious that an institution that appeared to be so unthinkable in the motherland should have taken firm root on the other side of the pond, where the first African slaves had been imported as early as 1619. Indeed slavery was found throughout the British Empire, where it was finally abolished in 1834, but it was not found in the United Kingdom itself. According to Blackstone,

Upon these principles the law of England abhors, and will not endure the existence of, slavery within this nation: so that when an attempt was made to introduce it, by statute 1 Edw. VI. c. 3. [1547] which ordained, that all idle vagabonds should be made slaves, and fed upon bread, water, or small drink, and refuse meat; should wear a ring of iron round their necks, arms, or legs; and should be compelled by beating, chaining, or otherwise, to perform the work assigned them, were it never so vile; the spirit of the nation could not brook this condition, even in the most abandoned rogues; and therefore this statute was repealed in two years afterwards. And now it is laid down, that a slave or negro, the instant he lands in England, becomes a freeman; that is, the law will protect him in the enjoyment of his person, his liberty, and his property.

The issue of slavery would, of course, divide Americans through the mid 19th century when a civil war led to its abolition throughout the United States, including those southern states that had so recently seceded from the Union to protect their "peculiar institution." Yet in England itself it was already illegal, except for the fact that many Britons were deeply invested in the trans-Atlantic slave trade, which London finally abolished in 1807.

The offence of slavery lies, not in denying a person's autonomy, as many commonly assume. After all, the claim to autonomy, that is, the right to do as one pleases free from external authority, is to aspire to an impossibility. We are hemmed in on all sides by a variety of authoritative agents, from parents to employers, from church elders to government officials, and so forth. Even our peers exercise an influence on us, meaning that our identity as freely-choosing persons is shaped by countless outside forces, some personal and some institutional. In a mature differentiated society, individual persons exercise a variety of authoritative offices relative to various communal settings, such as state, church institution, marriage, family, schools, workplaces, &c. (See my own book, We Answer to Another, for a more detailed discussion of this societal pluriformity.) None of these roles exhausts who we are as persons created in God's image. By contrast, slavery is based on one person's total control over another, thereby denying the multiple obligations that ordinary persons have to other persons and communities. Blackstone understood this better than many of the settlers in the far reaches of Great Britain's overseas territories.