At the Congress of Vienna in 1815, these lands, which had never known independence and whose inhabitants had little sense of cohesive nationhood, were assigned to the new king of the Netherlands, Willem I. Unlike the Netherlands proper, which was ruled by a Protestant king, the southern provinces were almost entirely Roman Catholic and its upper classes French-speaking. The union of these two very different lands endured for only fifteen years, after which the southern provinces, more conscious than ever of their distinctive identity, secured their independence as the Kingdom of Belgium, under King Leopold I of the house of Saxe-Coburg and Gotha, the same house that gave the United Kingdom Queen Victoria and Prince Albert.

Throughout the 19th century the same revolutionary trends that had divided the Dutch population also exerted their influence on the Belgians, similarly dividing its population between traditional Roman Catholics, liberals, and socialists. Belgian society was thus characterized by a similar pillarization to that of its northern neighbour, except that it lacked the Reformed Christian pillar. These distinct communities came to be known as « les trois familles spirituelles » (the three spiritual families). Post-independence political life came therefore to revolve around accommodating the aspirations of these groups and maintaining a modus vivendi among them. 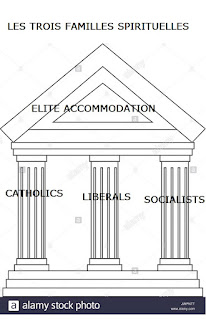 Without going into the details of Belgian history, I will note that it suffered two periods of German occupation during the world wars of the last century. In fact, it was imperial Germany's violation of Belgian neutrality in 1914 that brought the United Kingdom into the Great War. Whether the back-to-back wars facilitated the secularization of Europe is a matter for further study. Nevertheless, this secularization made its way into Belgium and shifted the lines of cleavage without eliminating them, as occurred in the Netherlands. Especially in the post-war era the religious/ideological divisions broke down and were replaced by a linguistic division.

Belgium had always been divided between the less prosperous Dutch-speaking Flemings and the more prosperous French-speaking Walloons in the south of the country. In the 19th century this had not yet amounted to a consciousness of distinct communal attachments, as these were outweighed by the need to assert their independence from the recently enlarged Netherlands. Leopold I lent to his small country a reputation for mediating disputes amongst the great European powers. Wallonia's economy became industrialized and more secularized, while Flanders remained rural and more devoutly Catholic. The Flemish population formed a slight majority of the country's total. Thus economic class lines tended to follow linguistic lines, leading Flemings to assert more strongly their identity, including their language, which had always taken second place to French.

After the Second World War, the increasing focus on language paralleled the general secularization of Belgian society and the decline of « les trois familles spirituelles » as cohesive communities. In this Belgium is similar to Canada, where the Protestant/Catholic divide along the Ottawa River was supplanted by an English/French divide, with the French fact concentrated in the province of Québec. However, whereas Canada moved in the 1970s to establish an official bilingualism coast-to-coast under Pierre Trudeau, Belgium adopted precisely the opposite principle: a separation of the two linguistic communities along a geographical line, while maintaining Brussels as bilingual and a small territory in the east as German-speaking.

In the post-war era the respective economic prospects of Flanders and Wallonia shifted with the former becoming the more prosperous part of Belgium and the latter paralleling the fate of the so-called rust belts of northern England and the northeast-Great Lakes regions of the United States. This reversal has contributed to a renewed confidence amongst Flemings and a sense of grievance amongst Walloons, who have lost their dominance over the country as a whole.

Will Belgium remain unified? It might not, but under the current régime of European integration, it may not matter as much as it would for a country outside the EU. Even when I visited Belgium in my youth, there were no customs controls at its border with the Netherlands, indicating already that Belgium was comfortable with freedom of movement through its own territory, at least from the north. So far Belgians appear to be satisfied with their divisions, accustomed to the increasingly rigid line running through their country from west to east. Supporting a population of over 11 million, Belgium has developed from a classic consociational régime to a federal system with a high level of autonomy for each of the three regions. This makes Belgium one of the longest lasting of the various consociational experiments we have looked at in this series.

Next week we will look at Canada, which is by no means a consociational régime. For the most part, our Canadian Westminster system is based on majoritarian assumptions which have posed a continuing threat to national unity. But at certain crucial points in our evolving constitutional history we have had to adopt some consociational features to accommodate a majority French-speaking province—une province pas comme les autres—as well as our aboriginal communities. In exploring the Canadian case, I will note several parallels to Belgium, with which it has much in common.