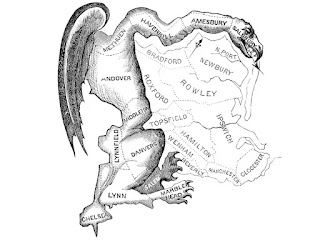 Christian Courier has posted my March column: Gerrymandering injustice, with an accompanying question: "How can states like Alabama pursue fairer representation?" An excerpt:

The states [of the United States] are responsible for redrawing the new districts within their own borders. Each district is supposed to have roughly equal population so that no group of people is over- or underrepresented. Sad to say, corruption and conflict-of-interest are at the very heart of the process. Because they are dominated by one of the two parties, a Republican state house, for example, will draw the boundaries to ensure that Republicans dominate the state’s congressional delegation, thereby badly skewing election results. Democrats quite happily do the same in the states they dominate.

This is known as gerrymandering, after Massachusetts Governor Elbridge Gerry, who signed a bill in 1812 creating a bizarrely-shaped district wrapping around Boston which, on the map, resembled a salamander. More recently, the Illinois General Assembly created a district encompassing two distant neighbourhoods in Chicago connected only by a thin line running down Interstate 294.