Josué Reichow: Reform Your Mind: The Philosophy of Herman Dooyeweerd 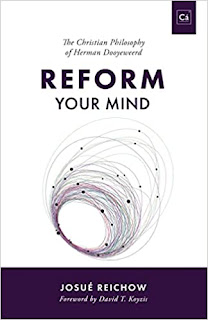 This book will be released at the end of the month. Here is the foreword that I wrote for it:

I first discovered the writings of Dutch Christian philosopher Herman Dooyeweerd in the mid 1970s when I was an undergraduate student. I quickly discovered that he was not easy to read, as his ideas seemed buried in a turgid prose style. Nevertheless, the hard work I put into understanding his philosophy more than paid off with respect to the use to which I discovered I could put it. My chosen academic field was political science, and I found that his nonreductionist approach to public life simply made sense. It better accounted for the realities of political life than, for example, so-called realists or behaviourists who could make sense of only a particular facet of reality. A decade later I would go on to write a dissertation on Dooyeweerd at the University of Notre Dame, a process that thoroughly grounded me in his magnum opus, A New Critique of Theoretical Thought. Because his Philosophy of the Law-Idea so well accounts for the fulness of God’s world, it became a primary influence on my own writings, including Political Visions and Illusions (Downers Grove, IL: IVP Academic, 2019).

Half a century ago, Dooyeweerd was largely unknown outside certain rarefied circles associated with the Dutch Reformed tradition. But in the decades since his passing, more of his works have been translated into English and other languages, most notably Portuguese. These translations have not necessarily made him easier to comprehend, but once readers have immersed themselves in his philosophy, acquainting themselves with the specialized terms that make up the building blocks of his system, they will encounter a treasury of insights into the nature of the cosmos—insights that can be applied in a variety of academic fields as well as in lived experience.

One of the more remarkable developments in recent decades is the dissemination of Dooyeweerd’s thought, along with other neocalvinist or reformational writings, in Brazil, the fifth largest country in the world and still for now a predominantly Catholic nation. The book you hold in your hands is written by one such Brazilian whom I have the pleasure to know through English l’Abri. Josué Reichow here introduces us to the principal contours of Dooyeweerd’s philosophy, originally for a Brazilian readership and now, in translation, for an English-speaking audience.

Others have written introductions to Dooyeweerd’s thought, but this is the only one in English that I know of which treats his growing influence in Brazil, bringing him into conversation with Liberation Theology and the Integral Mission of the Lausanne Movement. The rapid growth of evangelicalism in Brazil has astounded Christians in the northern hemisphere, especially in North America and Europe, where the faith appears to be declining. Of course, when such large numbers of people turn to Christ for their salvation, the fruits of their conversions do not automatically manifest themselves, especially with respect to the health of the larger society. Yet the fact that an increasing number of Brazilians are reading the likes of Dooyeweerd is a hopeful sign. It means that they are carefully thinking through the implications of their faith and genuinely seeking the will of God as they live their lives to his glory. I trust that Reichow’s book will serve a growing audience interested in Dooyeweerd’s important contribution to the enrichment of Christian intellectual life.

The book is available for pre-order at Barnes & Noble and Amazon (UK) but does not appear yet on the publisher's website.