The tepid witness of an insular prelate 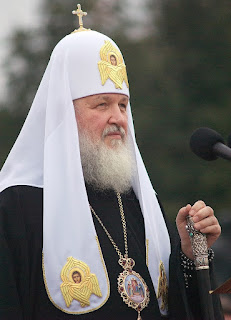 By far the largest of the autocephalous Orthodox churches is the Russian Church, headed by Patriarch Kirill of Moscow. Estimates of membership differ widely, ranging from 90 million to 155 million, mostly within the Russian Federation itself, but also in Ukraine, Belarus, and Moldova. In 2018 a split occurred within global Orthodoxy between the followers of Ecumenical Patriarch Bartholomew of Constantinople and Kirill over the status of an autocephalous Ukrainian Orthodox Church. This is possibly the most serious division within the communion since the 1054 schism that ended its ties with Rome.

On the day that hostilities began between Russia and Ukraine, the Patriarch issued a pastoral letter to the hierarchs, clergy, monastics, and all faithful of the Russian Orthodox Church. This would presumably include Russian President Vladimir Putin, of whom he is a close ally.

Your Beatitude! Your Eminences and Graces! Dear fathers, brothers, and sisters!

I take the suffering of people caused by the events taking place with deep and heartfelt pain.

As the Patriarch of All Russia and the primate of a Church whose flock is located in Russia, Ukraine, and other countries, I deeply empathize with everyone affected by this tragedy.

I call on all parties to the conflict to do everything possible to avoid civilian casualties.

I appeal to the bishops, pastors, monastics, and laity to provide all possible assistance to all victims, including refugees and people left homeless and without means of livelihood.

The Russian and Ukrainian peoples have a common centuries-old history dating back to the Baptism of Rus’ by Prince St. Vladimir the Equal-to-the-Apostles. I believe that this God-given affinity will help overcome the divisions and disagreements that have arisen that have led to the current conflict.

I call on the entire fullness of the Russian Orthodox Church to offer a special, fervent prayer for the speedy restoration of peace.

May the All-merciful Lord, through the intercession of our Most Pure Lady the Theotokos and all the saints, preserve the Russian, Ukrainian, and other peoples who are spiritually united by our Church!

+KIRILL
PATRIARCH OF MOSCOW AND ALL RUSSIA

It is difficult to imagine a more tepid response to the fraternal bloodshed occurring between the two neighbouring nations. Given that Putin is a professed Orthodox Christian, and given that he has flagrantly flouted the teachings of Scripture, the Patriarch should openly condemn Putin's action in no uncertain terms, perhaps threatening excommunication if he fails to repent and to change his ways.

Sadly, the Orthodox have a sorry history of grovelling before their political rulers going back to Byzantine times. This is something I explored three decades ago in an article published in Review of Politics: Imaging God and His Kingdom: Eastern Orthodoxy's Iconic Political Ethic. Orthodoxy's political ethic revolves largely around the principle of symphonia, or harmony, between church and state. Patriarch and emperor are to co-operate in governing a faithful nation, with the emperor being accorded a special exalted place within the people of God. In so far as the emperor is an iconic reflection of God's rule of the universe, he should be accorded suitable reverence by his Christian subjects. Historically this has produced a quiescent church, unwilling to challenge a political leader when he errs, and, as a consequence, a political culture conducive to autocracy. 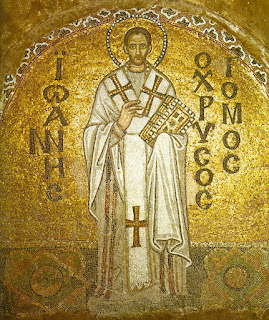 It hasn't always been so. One of the more revered holy men in Orthodoxy is St. John Chrysostom (c 347-407), whose surname means "golden mouth." He was one of the great preachers of the church, and his paschal homily is read at Easter in Orthodox churches. During his tenure as Archbishop of Constantinople, he used his position to denounce the social injustices and sins of the day, eventually leading to his exile.

However, in the centuries since John's time, Orthodox prelates have been more likely to cosy up to their rulers, going so far as to accept political interference in the institutional church. The Orthodox themselves have recognized this to be one of the drawbacks of their tradition. Here is Yevgeny Barabanov on the subject:

[S]urely we shall be obliged to acknowledge that in Byzantium and Russia ideas about the Kingdom of God and the kingdom of Caesar too often merged and became interchangeable. The subjection of the Church by the state is an old eastern tradition.

I had hoped that, with the collapse of the Soviet Union and the liberation of the church from the godless grip of the Communist Party, there would be a rebirth of faith in a suffering land. Perhaps the church would become a force for justice, recognizing that the gospel is not just a source of toothless spirituality and a comfort to despots. Sad to say, political cultures and the traditions infusing them are generally tenacious and slow to change, even when they have produced bad fruit.

However, there is a glimmer of hope in this RFE/RL report: Orthodox Clerics Call For Stop To War In Ukraine In Rare Challenge To Russian Government.

At least 176 Orthodox clerics said that they "respect the freedom of any person given to him or her by God," adding that the people of Ukraine "must make their own choices by themselves, not at the point of assault rifles and without pressure from either West or East."

The letter says the clerics “bewail” the suffering that has been “undeservingly imposed on our brothers and sisters in Ukraine.”

It is very rare for such a large number of religious clerics of the Orthodox Church to openly challenge President Vladimir Putin's government. In recent years, the Russian Orthodox Church and its leader, Patriarch Kirill, who did not sign the letter, have fully supported Putin's policies.

Let us pray for these clerics who have taken such a courageous stand. May God grant that their voices will be heard, putting an end to a conflict that most Russians do not want.

Rather different from the Scottish Presbyterian tradition.
"Andrew Melville to King James VI of Scotland (in 1596 at Cupar, Scotland) in reply to the king who reminded Melville that he was the king's vassal, particularly in matters ecclesiastical: Sirrah! ye are God's silly vassal; there are two kings and two kingdoms in Scotland: there is King James, the head of this commonwealth, and there is Christ Jesus, the King of the Church, whose subject James the Sixth is, and of whose kingdom he is not a king, nor a lord, nor a head, but a member."

Wonderful! I wish that my Orthodox forebears could have understood that better.