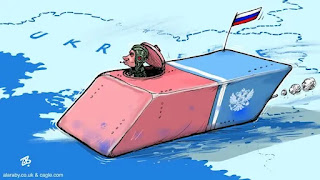 Christian Courier has posted my article, Putin's recklessness, with this subtitle: "Historic parallels to Putin’s unjust aggression." An excerpt:

Putin has now moved into cliché territory: he has put all his cards on the table, shown his true colours, upended the apple cart. Making comparisons to Adolf Hitler generally elicits finger-wagging because it is done too often by people trying to score political points against opponents. Nevertheless, it is difficult to avoid the parallels with the Nazi dictator’s dismemberment of Czechoslovakia over German-speaking Sudetenland and his pretext for invading Poland the following year.

But we should note the differences too. This war is not popular with ordinary Russians, as massive demonstrations in Moscow, St. Petersburg and elsewhere are indicating. Younger Russians with dim or no memories of the Soviet era will not be wearing “Make Russia Great Again” hats any time soon. Nineteenth-century nationalist dreams of glory are the delusions of an ageing despot living in the past.