Russia and Ukraine: a fraught relationship

In September 1990 famed novelist Aleksandr Solzhenitsyn wrote an article in the journal Komsomolskaya Pravda titled, "How to Revitalize Russia," which was translated the following year and published as a small book, Rebuilding Russia: Reflections and Tentative Proposals. This was just prior to the dissolution of the Soviet Union into its constituent republics. The essay took the form of a series of proposals for a renewed, post-communist Russia, reiterating his earlier Letter to the Soviet Leaders (1974). Much of what we read here was quickly overtaken by events in late 1991, including the failed August coup d'état and the subsequent end of the Union in December. Yet it is worth rereading the author's proposals for Ukraine and Belorussia during the present crisis between the former country and Russia.

Solzhenitsyn began by affirming that, given his half-Ukrainian ancestry and military service in Belarus, "I am addressing both nations not as an outsider but as one of their own." Indeed,

All the talk of a separate Ukrainian people existing since something like the ninth century and possessing its own non-Russian language is a recently invented falsehood. We all sprang from precious Kiev, from which "the Russian land took its beginning" . . . and from which we received the light of Christianity. 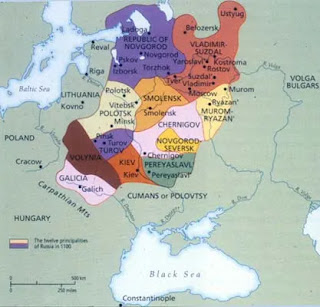 This expression is by no means unusual for Russians who view the historic seat of Kievan Rus as an integral part of their own country. In these early centuries, Russian rulers would routinely divide their territories amongst their sons, leading to a politically fragmented country. By the end of the western middle ages, Russian-speaking lands were ruled by a collection of independent realms, including, in addition to Kiev, Polotsk, Chernigov, Smolensk, Volynia, the Republic of Novgorod, and Vladimir-Suzdal. The last of these would develop into the Muscovite principality, which would go on to reunify Russia and expand eastwards and southwards, creating the largest country on earth in terms of area.

In the Russo-Turkish war of 1768-1774, the Empress Catherine II the Great conquered territory from the Ottoman Turks which she subsequently renamed Novorossiya (Новороссия). This gave Russia a coastline along the Black Sea, which she populated with her Russian-speaking subjects. It was during this time that such cities as Sevastopol and Odessa were founded. Turkic-speaking peoples, such as the Crimean Tatars, continued to inhabit this region, but eventually ethnic Russians became the majority, a status which continues to the present day.

Ukraine enjoyed a brief but troubled independence during the Great War and immediately after, but it was soon incorporated into the new Union of Soviet Socialist Republics as the Ukrainian Soviet Socialist Republic. In 1954 Nikita Khrushchev, then First Secretary of the Communist Party of the USSR, transferred jurisdiction over the Crimean Peninsula from Russia to Ukraine, despite Crimea's ethnic Russian majority. This is something that Russians never forgot.

As of 1991 there is now an independent Ukraine with its capital in the historic city of Kiev, now often transliterated as Kyiv (Київ). However, it is a severely divided country with an uneven sense of national identity across its large territory. The most "Ukrainian" parts of the country are in the west, especially around the city of L'viv (Львів), also known as L'vov (Львов) in Russian and Lemberg in German. During the twentieth century L'viv belonged to Austria, Poland, the Soviet Union, and finally independent Ukraine. It is a western-leaning city with historic ties to the large Polish-Lithuanian commonwealth of the late middle ages and early modern era.

The eastern and southern parts of Ukraine lean towards Russia and have a weak sense of Ukrainian identity. This is reflected in presidential elections as seen in the following maps taken from this website: 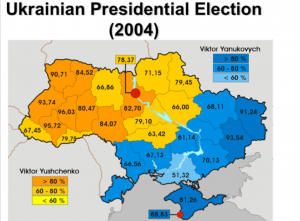 In the 2004 election, two Viktors were standing for the presidency, Yuschenko and Yanokovich, representing pro-western and pro-Russian positions respectively. This pattern has been repeated in both parliamentary and presidential contests, although it was not as obvious in 2019. Martin W. Lewis created a map to represent the different attitudes of a divided Ukraine: 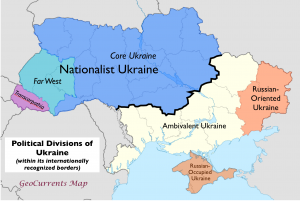 Note that the Crimea was annexed outright by Russia in 2014, while the Donbas region in the far east has been the seat of the pro-Russian separatist movement, which Putin's Russia has been encouraging.

Let us return to Solzhenitsyn's proposal for Ukraine:

To separate off the Ukraine today would mean to cut across the lives of millions of individuals and families: the two populations are so thoroughly intermingled . . . . Of course, if the Ukrainian people should genuinely wish to separate, no one would dare to restrain them by force. But the area is very heterogeneous indeed, and only the local population can determine the fate of a particular locality, while every ethnic minority created by this process in a given district must count upon the same kind of forbearance toward itself.

This suggests that, had the author's advice been followed, independent Ukraine would perhaps consist only of the blue coloured region shown above, with historic Novorossiya likely remaining with Russia.

Within its current borders, a western-oriented Ukraine, belonging to both the European Union and the North Atlantic Treaty Organization, is clearly a nonstarter. For personal and historical reasons, I am loath to suggest partitioning a country, which always disrupts people's lives and uproots them from their homes. Nevertheless, under current conditions a united Ukraine looks increasingly unsustainable over the long term.

There is, of course, more to be said about Putin's ambitions in the current crisis, but I'll save that for a future post.

Thanks for the history lesson. It will help as we hear the news coming over the next weeks and months.

Only three months later, this post is terribly dated. The division that formerly characterized Ukraine for so many decades--indeed centuries--disappeared fairly quickly under the onslaught of Vladimir Putin's missiles. Putin may ultimately succeed in holding onto Donetsk and Luhansk, but he has effectively made enemies of all Ukrainians, whatever their former sympathies.