Vézelay is a delightful village in east-central France whose chief claim to fame is the romanesque Basilique de Marie Madeleine, which claims to house the remains of Mary Magdalene, the "apostle to the apostles," as she was called by some of the early church fathers. I visited this village back in 1975 and quickly fell in love with it. The following summer I painted one of the streets I had photographed. Here is a recent photograph of the street: 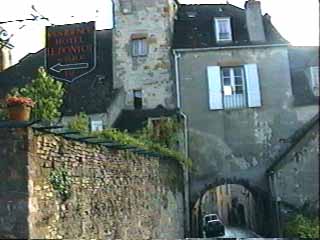 Immediately below is the oil painting I did of the same scene in the summer of 1976, when I was 21 years of age. It now hangs in the dining room of our home. It is obviously taken from a different angle and slightly farther away from the arch. 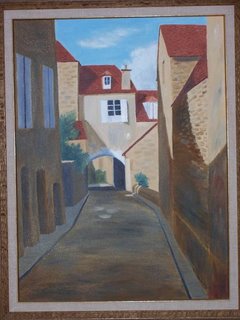 But it seems I was not the only one to find the scene worth committing to canvas. Here is Émile Wegel's rendition, which appears to be a water colour:

And here, finally, is Thérèse Verbery's oil on canvas version, which bears a certain likeness to my own, including the long shadows:

The principal difference between our two efforts is that mine makes the village appear somewhat hot and arid, while Verbery's brims with life and seems somehow more inviting. By contrast, though Wegel's painting may look brighter, with more vivid colours, it is just as lifeless as mine and no less forbidding. Looking at my own work from the vantage point of three decades later, I can't help but wonder whether I was influenced in some fashion by Edward Hopper. If I had to do it again, I'd try my best to communicate something of the warmth and hospitality of Vézelay, something I seem not to have successfully captured.

Incidentally, three days ago was the feast day of Mary Magdalene.
Posted by David Koyzis at 08:49