Love that sprawl: a (severely) qualified defence of the suburbs

Back in 1962 Malvina Reynolds wrote and sang a song, Little Boxes, that hit the charts that year and was further popularized the next year by Pete Seeger. Its memorable lyrics poked fun at the standardizing conformity of post-war suburban life in the United States:

I was in the lower elementary grades at the time, living — horror of horrors — in one of the western suburbs of Chicago: Wheaton, Illinois. I recall the song, and I can still sing at least some of it from memory, but its biting social commentary largely went over my head at the time. 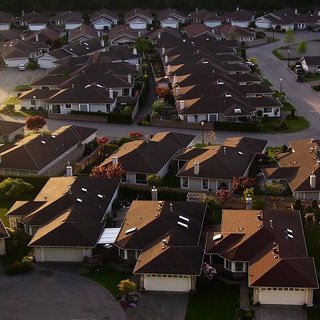 Reynolds was not the first to look down on the suburbs. Ernest Hemingway is reputed to have said that his native village of Oak Park, just outside Chicago (and where yours truly happens to have been born), was characterized by "broad lawns and narrow minds." Countless books and films have made the suburbs look like fabricated, but fundamentally false, communities, where neighbours live adjacent to each other, but without forming lasting bonds of solidarity. Everyone, as the cliché puts it, tries to "keep up with the Joneses," i.e., to acquire that more expensive gas grill or to join the more exclusive country club.

I was inspired to reflect further on suburbia by this post from our resident Latin-rite Calvinist. As a product of the suburbs, I can attest to both their advantages and drawbacks.

Advantages: (1) As the central cores of American cities deteriorated, the suburbs offered a refuge where a way of life could be started anew. (2) They offered some of the virtues of both urban and rural life. The urban metropolis was never far away, especially if the suburb was served by a rail line or, later, one of the new limited-access highways begun in the 1950s and '60s. Yet there were often open spaces and farms outside of town. This was the case with Wheaton when I was growing up, though it's no longer true four decades later. (3) It seemed to be a good place to raise children. Wheaton had plenty of parks, and the public schools were amongst the best anywhere. (4) Although this was not true everywhere in the US, Wheaton had (and continues to have) thriving churches representing a variety of denominations.

Drawbacks: (1) The suburbs were just a tad too comfortable, especially the more prosperous ones. The social climate encouraged parental indulgence of children, who would grow up into the self-absorbed baby boomers, many of whom thought it their right not to grow up at all, at least with respect to manners, mores and dress. (2) The suburbs often contributed to the deterioration of city centres when those fleeing to the 'burbs took the tax base with them. This led to a situation in which residents of Wheaton, Evanston and Oak Park would commute into Chicago, using its services but contributing nothing to their upkeep, because only those actually living in Chicago were taxed. This has been less of a problem in Ontario, where regional or metropolitan governments are authorized to tax.

So what do we do with the peripheries of metropolitan areas? To begin with, they are not going to go away, the wishes of the Reynoldses, Seegers and Hemingways notwithstanding. As long as there have been cities, there have been people living at their edges. In third-world cities these take the form of shanty towns, inhabited by those who have left the countryside to seek work in the industries often associated with urban centres. But these are the polar opposite of the comfortable suburbs of North America and elsewhere in the western world, and they deserve to be treated as phenomena in their own right.

The place to start is to recognize that human settlement patterns are legitimately diverse, encompassing city centres, other urban neighbourhoods, near suburbs, far suburbs (near and far being relative to the available transportation), rural regions and small towns and villages. Each of these has its own beauty and integrity. Similarly each is in its own way subject to human sinfulness. There is nothing intrinsic to any of these settlement patterns that will insulate residents from the ravages of the fall. Nor should we wish to see any one of these squeeze the others out of existence.

I myself am currently living in a part of Hamilton, Ontario, that is generally considered to be suburban — that is, the part of the city above the escarpment popularly, if misleadingly, known as Hamilton Mountain. However, one of the benefits of living where we do is that we are within walking distance of two pharmacies, a supermarket, a variety store, a dry cleaner, a dollar store and the enormously popular Sweet Paradise Bakery. This is not generally characteristic of suburbia, where one must have an automobile to get anywhere at all.

Indeed, to my mind, the fact that suburbs are built around car ownership is one of the chief drawbacks of these communities. I think I was probably happiest living in the centre of Toronto nearly thirty years ago, where I didn't need a car. I was quite content to ride the trams, buses and subways, which would take me anywhere I wanted to go within the city. I could wish, among other things, that suburban areas would take more seriously the need for public transportation so as to diminish residents' dependence on the automobile.

So what is to be done. . . about the suburbs? Do they need renewal? Definitely. What shape should this take? That's for a future post.
Posted by David Koyzis at 12:48